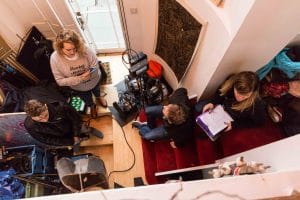 The decision to launch a crowdfunding campaign to adapt my radio series HOW TO HAVE A PERFECT MARRIAGE into a web pilot YOURDADSGAY was not a Eureka moment. Although my co-producer and director, Duncan Thomson, and I, could talk endlessly about the possibilities for our project, yet curiously we were more reluctant to commit ourselves to a date when we might launch the campaign and make the dream real, or at least see if we could garner the support we needed.  We were anxious about failure, naturally, but probably more anxious about our ability to crack the dark art of crowdfunding itself.  What exactly was involved? What kind of commitment would it require?

We had settled on a sum we wanted to raise – £10K. This seemed the minimum amount necessary to make a 15-minute pilot – but in truth I was being guided by Duncan here, since I was not a producer. However, we also needed a sum that was achievable, and was indicative of the kinds of sums that campaigns did achieve regularly. Essentially, we didn’t want to either undersell or oversell our project.

The key to any of this was obviously going to depend on the quality of the campaign we ran, and that in turn was going to be influenced by the platform we chose – and this is where we seriously lucked out. I don’t know who exactly recommended Phundee – www.phundee.com – but a review of their projects – hugely varied and diverse – as well as a significant success rate – made me feel this was a good fit. So I found myself in Bonhill St, E1 at one of Google’s Campus sites for Start Ups, to meet Phundee’s Director, Ashon Spooner.

I’m not sure if every Crowdfunding project makes a point of meeting with the director of their chosen site, but it certainly felt important to us. Personal contact can be a vital incentive for any successful project – and Ashon’s interest right from the start was a powerful boost to our morale.  He would nag, argue, debate, and encourage us throughout the entire campaign. His support was absolutely vital

And he made an immediate impression. Self-possessed and quietly charismatic, he had a hurried, unfussy manner. Somebody told me he was an ex dancer, and that made sense. He certainly carried himself with confidence – and a succession of hats. In fact a succession of rather wonderful hats.

The campus itself is a hive of activity, with break out spaces, cubicles, and the occasional side room, which is where we pitched YOURDADSGAY. Would it fit in with the existing roster of Phundee campaigns? Was our target too ambitious? Was it achievable?

Fortunately for us, Ashon responded very positively. I think what most impressed him was our tack record in broadcast projects along with a keen sense of who else we wanted to be involved, and how we wanted to proceed.  Pulling up a white board, Ashon introduced us to the methodology behind any successful campaign Phundee ran, and one he strongly us to adopt for YOURDADSGAY.

Most campaigns fail, he argued, because of poor preparation. A detailed, thorough and methodical period of prep was essential in a six-week period leading up to the launch date. This would be based around building a subscriber list via Mailchimp, which could provide templates for regularly updates throughout.  Ashon told us that at a minimum Duncan and I should have a hundred subscribers each on Mailchimp. He also recommended another site to timetable these mailouts, called Hootsuite.

We learnt that in most successful campaigns about 85-90% of donations come from our personal contacts, which is why we would inevitably be relying on friends and family. We also learnt that it takes up to three attempts at reminding a contact before they are likely to donate. This I knew to be one of the more delicate aspects of fundraising – both Duncan and I would have to start nagging people – sorry, gently nudging people. Our focus would have to be absolute.

Ashon explained to us the psychology of fundraising. Firstly, we had to decide on the length of our campaign – after some discussion we agreed on 45 days. He then told us that when the campaign launches there would be an initial momentum over the first 7-10 days, followed by a much longer period where money would dribble in, frustratingly so, perhaps to the extent where there might not be donations for days. However, if the campaign had hit 70% of its target before the last week or so, then the chances of it achieving the whole amount were dramatically increased. Everyone loves to back a winner, and there is a special thrill in being the one to take the campaign over the finishing post.

We could expect some media interest if we managed to hit 30% of our total within the first ten days. In fact, Ashon told us, this was the real target he had to aim for if we were going to be successful. We also had to decide whether – in the event of achieving 70% of our total – we would be prepared to go ahead with it. If we failed to achieve that amount, then Phundee would return all monies to the donors. Phundee’s fee would be 8% of our total – so in order for us to bank £10K we would in fact have to raise £10.8K.

What was made crystal clear from this period of preparation was that we would have to dramatically increase our social media presence as a way of not only sustaining momentum in the campaign but of simply finding new angles to push what was the same old message. Ashon could draw on several existing campaigns to illustrate the don’s and don’ts – Duncan and I spent hours flicking back from one campaign to another, to get a sense not just of the message being conveyed, but the way in which donors were being invited to engage with a project. Key to this was a series of incentives – everything from badges (£5 donation) to T Shirts (£20 donation) to a writer masterclass (£150 donation) to a Producer’s credit (£500 donation). Duncan and I would have to come up with a series of equally tempting goodies to clinch the deal.

Gradually the campaign was taking shape. I subscribed to Instagram, to Twitter, opened dedicated Face Book Pages, my own website – www.yourdadsgay.co.uk – up to ten different sites in all. I started to compile an archive of suitable images to accompany Mailouts – each showing the title YOURDADSGAY – in a domestic setting. Each, I supposed, trying to build a brand. And I also had some cards printed, to be able to give out at networking events.

It was the lull before the storm. The fake war. It was getting all our little ducks up and in a row. But we still had to fire the starter’s pistol.

Eventually , after a horrible amount of prevarication, and legendary patience on Ashon’s behalf, we hit on a date. The end of February 2017.

What is they say? Fortune favours the brave….

It was time for the rubber to really hit the road.