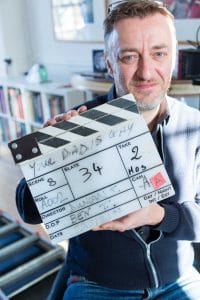 The alarm goes at 0545 but I had already been awake. It was Day One of the shoot for YOUR DADS GAY, the day I had been working towards for over two years. My Producer, Rebecca Graham, and I had been desperately filling places on our Crew right up to the wire – securing a Makeup Artist on Christmas Day. Director Duncan Thomsen was giddy with excitement. I knew it was my and Rebecca’s job to create a space for him to do his best work. We would be the ones to run around dealing with crises, which seemed endless – will there be parking tickets, has catering been sorted? (It had, my friend Bernie stepping in – I was determined the Crew have a hot meal every day), could I find somewhere for a crew member to stay (I said No!). My learning curve had now become a vertical line with no apparent end.

Of course, the one thing over which I had no control was the weather. Boxing Day was crisp and bright, and today was blustery, rainy – with snowy interludes. Oh, and possible winds of 40mph, which would adversely affect sound recording. Reading the forecast was my lowest point – I admit I cried with frustration. Our license to film outdoors (another crisis, involving last minute phone calls to Hackney Council) – stipulated the 27th. I braced myself.

Day One was all about getting the exterior shots. It was important for Duncan to tackle what in many respects was the most complicated part of the script, for him to gain some much-needed confidence. Every other shot was in one location on Clapton Sq, which is where we all met – a Cast and Crew of 15 – early that morning. After brief introductions and Croissant, another small issue – our DoP was caught into the snow storm coming down from the Midlands. I said nothing. I knew we were all by now strapped into our seats. There was no turning back. Whatever happened from now on, we had to just deal with it…

At this point, filming seems to be an endless stage of technical issues, where crew huddle around equipment. A monitor goes down, the calibration on the Steadiecam takes over an hour to adjust – whilst Duncan and his Script Assistant, Zsani, are caught up in what seems to be heated discussion over shots. I am screaming inside – isn’t anyone actually going to film?

Actors are sensitive souls, and fortunately a chum of mine has his people carrier here to keep them warm. Another is guarding the film equipment. Whilst is Duncan is becoming more engrossed in his role, creating his own energy to keep warm, I – as writer and Executive Producer – am in a strange place which takes some adjusting to. Of course, I have a creative input, but I also have to stand back and let others do their job. It will take the rest of the shoot for me to really embrace that.

Back at the house – our exterior scenes successfully shot – we stuff ourselves with Spaghetti Bolognese, exhilarated. Ordeal by shitty weather over, now we are indoors everything’s going to be easy, yes?

Call Sheets are issued every day which detail the schedule of work and other important information. Actors are scheduled in order to maximise efficiency. Everything is locked into a process that has to be adhered to ruthlessly – and even more so, when on a tiny budget. Rebecca knew that we would incur extra costs that were unavoidable – that’s what the contingency was for.

Nevertheless, everyday brings new challenges, and today it was the need for us to protect the location better. I felt a keen sense of responsibility because it belonged to two dear friends. Covex Floor Covering became our new best friend.

The living room had been designated the green room, where our actors rested between shots. We had a range of experience – from Mia Dessaur on her first job, to Dona Croll, surely a Dame in waiting. Dona’s experience and great stories were surprisingly effective not just in raising a laugh, but in creating confidence amongst us all. I know Duncan found her professionalism on set gave him many options to play with in performance.

Long periods of setting up scenes, with sudden bursts of activity. At one point a Traffic Inspector rocks up, but I persuade him not to give tickets for cars without parking permits. The Sun, of course, is shining brightly.

Small script changes are made to accommodate performance, and location. The Crew and Cast are turning out to be a seriously lovely bunch – considerate, helpful. Rob, the AD, is totally Zen – nothing seems to unnerve him, and yet he is subtly maintaining pressure to finish the schedule for today and not have to carry any scenes over.

Now a pattern has established itself. Picked up around 0600 by Duncan and Crew, we speed through the City and stop off for a guilty MacDonald’s McMuffin, before arriving for work. I realise now that the bonding process, even on a four-day shoot – which grows up around these little rituals – is a hugely important element of making a good film. What happens off screen carries through on screen.

As Duncan becomes more confident in his role, so there are longer and longer periods of time where Rebecca and I have no specific role, but a general value. We are the ultimate authority on site, and often must make judgements all day.  Rebecca is a great Producer – but a Director too. Occasionally I wonder if she yearns to interrupt Duncan and tell him how to make the shot (at the end she admits she does!).

Now the filming is acquiring a rhythm and shape. Challenges present themselves, but in solving them a creative spirit is released. As a writer, you start to really appreciate the different perspectives other creative people bring to your work – the designers, lighting, script supervisor, sound recordist. They are seeking to present your vision, through their own specialist skills. And as a writer, you gain new insights into how to tell a story.

It’s our final day, and everyone is exhausted. Tired-in-the-bones exhausted. Duncan knows it’s his job to rally the troops, and rises to the challenge.

One of the most preoccupying issues has been light. Filming at Christmas means we have 8 hours of sun, so lighting each room to maintain consistency can often involve batteries of lamps. The pilot episode takes place over a couple of hours, almost in real time. We have shot in total darkness, but hopefully you won’t notice.

At this stage a weird kind of nervous energy affects us all. As the end draws near, the jokes become louder, ruder – laughter echoing through the house.

And then it’s done. I can hardly believe it – it’s a wrap. Duncan collects everyone together to thank everyone individually – a lovely gesture. When I try and say something emotions get the better of me. Then there is a group photograph, promises of a proper celebration at the first showing, and then cars being filled with equipment, and clearing up, hoovering, polishing, dusting…

Oh the glamour of it all…

And then, like a great party, it is suddenly over and all those people in whom you entrusted your script, are gone. I collect my bag and say goodbye.

Yes, we did it. We actually did.