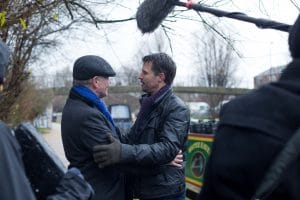 They say the hour before dawn is the darkest, and whether that is literally true I have no idea. However, metaphorically it’s completely on the money – oh dear, there I go confusing my metaphors again. But that’s what happens when you decide to adapt a four-year-old Radio 4 series into a webseries pilot, raise £11.4K via a Kickstarter, film it in four mad-as-a-hatter days, edit it – and then think, what the hell do I do with it now?

Darkness. Pitch black darkness. And you stumble towards a bat squeak of light.

Each stage is so unique and thorough in its challenges – writing a script, raising money, putting together a film crew – there is a temptation to want to postpone the really important decision forever. Where to send the finished version of YOURDADSGAY, to give it the best chance of blossoming into something bigger and better. What to do now?

In the fantasy football version our Pilot gets picked up by Netflix or Sky or Amazon and immediately commissioned into a fully-fledged series, but realistically, we are looking at the Festival Circuit. And that can seem as intimidating and labyrinthine as negotiating BREXIT. What advice can I take from a more experienced Film Director in these matters? I asked a colleague, who gave me a number of personal and candid views about the grief and glory of submitting your film to festivals, based on her experience. They are as follows:

As I put down the phone and absorbed what I’d been told, none of it seemed especially surprising. However, the last thing we discussed in many ways seemed the most relevant. And that was the realisation that, despite guidelines and rules and criteria, many of these Festivals – especially the smaller ones – inevitably operate like small fiefdoms, run by people as crazily passionate and opinionated about film as well were. Accepting that would somehow make the whole process a little more manageable.

But ask me in a years’ time. In two weeks we will have finally finished YOURDADSGAY, added graphics, and titles and music. Finally, after nearly three years gestation, our baby will be born and sent out into the world.