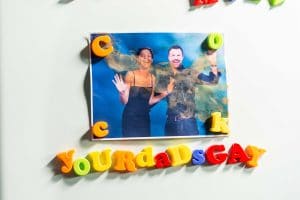 About three years ago – to my astonishment it really is that long – I was introduced to Duncan Thomsen. He was a High-Flying Editor looking to direct – indeed had a lovely comedy drama called THE MAGIC BUS which he was touting around. I had just finished the first series of HOW TO HAVE A PERFECT MARRIAGE and was thinking about turning it into a web series.  He was full of confidence and what I now know was brittle bravado. I lacked confidence and was desperate to create opportunities. Three years and we have gone on an incredible journey – each stage totally absorbing in its own right, and presenting a series of unique and considerable challenges. The Campaign to raise money, the assembling of a credible production team, the actual shoot itself, and now the Edit.

Several days ago I sat in Duncan’s impromptu edit suite at home, his two cats ricocheting around the room in black and white blurs, and we went through the final cut – all 14 minutes and 29 seconds of it. Music had been scored and was edited in, the text for the Graphics finally fixed, the credits themselves scanned and re-scanned – had we missed anyone? We have a day’s Grading scheduled for the 6th April, and then the final sound session and – we’re finished. Done. Over.

And I am terrified.

This journey has only really maintained its momentum on a sense of possibility. The major achievement of actually making a short film pales against the crippling desire – like all of you out there – to further a career, create opportunities out there, create work and a reputation and…the chance to do it again, and maybe – actually, this time – maybe get paid. I am immensely proud of the fact we paid everyone, but even that is coloured by the occasional feeling of deep resentment that neither Duncan nor I have earnt anything out of this yet.  The feeling that yet again it’s the same people who take all the risks.

So…. we both know there are THREE possible outcomes to YOUR DAD’S GAY. Firstly, a production company sees it and decides to commission a series. Secondly, a production company sees it and gives us enough money to remake the pilot (and in some ways I think this is the version we have discussed most often). Thirdly, Producers see it as a calling card and decide to employ Duncan and myself – either together or separately. But of course there is the Fourth possibility, isn’t there – that all this immense hard work results in absolutely nothing. Squat Diddley. Nada,

And I am terrified.

So, in order to mitigate this fear, we have to write a Brochure. Yes, that’s right – just when I thought, I mean I really thought – that I didn’t have to do anything more, there is yet another hoop to jump over. It seems that every project needs a brochure.

What does this brochure include?

First there is an Executive Summary, which would include The Pitch, The Genre and the Slug Line (in which other films are invoked in order to provide an easy comparison, eg ‘The Italian Job meets Little Miss Sunshine via The Blues Brothers

Then your key Production Personnel and Casting Ideas (Ideas, remember so you can go totally Fantasy Football), a Synopsis, and then a Director’s Statement.

You still with me? We haven’t even got to the section marked Audience. In many respects, this is the most important part of the entire brochure, because it actually addresses the potential appeal of the idea, but in relation to similar movies. And of course it is the Gross takings against the film’s budget that is most relevant here. LITTLE MISS SUNSHINE, for example, took $96m against a budget of $8m. That’s the kind of return to bring a tear of joy to any Indie Producer’s eye, and comparable to the rate of return on a Hollywood blockbuster.

But how to achieve this? This is where the real dark art of moving promotion is most illuminating. For Duncan’s brochure for his film THE HAPPY BUS he outlines his strategy thus:

‘In order to create and sell a successful product, our strategy is to build broad awareness by using ‘Push’ strategy through established distribution mechanisms for independent low budget films (e.g. film festivals);

Building the film’s brand by using high quality artwork and releases, worded and distributed by film PR experts, will result in raising the profile of the film in the eyes of acquisition executives and distributors;

Creating a PR strategy that will create wider awareness by getting the film into mainstream news as well as in the arts and culture press;

Taking the film to top film festivals to profit from the worldwide film press who attend, therefore increasing awareness already built by our PR prior to festival dates;

Using ‘Pull’ strategy to create an audience for the film before it is released:

Not only that, he sets this strategy in a context, with sections on distribution and marking, Soundtrack opportunities and other spinoffs for the Marketing guys to get excited about.

I include all this as an example of how to package a film project in such a way as to come across as a real and credible project, in which great care and attention is given particularly to the idea of Audience – whom are you appealing to? What is their demographic? Why should anyone come and see your movie – or watch you webseries?

We are in a slightly different category, given that we have raised some money to make a pilot to try and prove – inter alia – that we ARE a real and credible project, and one worth investing in. But I am – as I write – totally overwhelmed by yet another task I have to undertake – and effectively – as well as recognising its vital importance to the future of my little film.

Soon our film will be finished. We will organise a premiere to thank all those who supported us, invested in us, listened to us, believed in us…

And maybe that’s why I’m terrified. I don’t want to let them down.